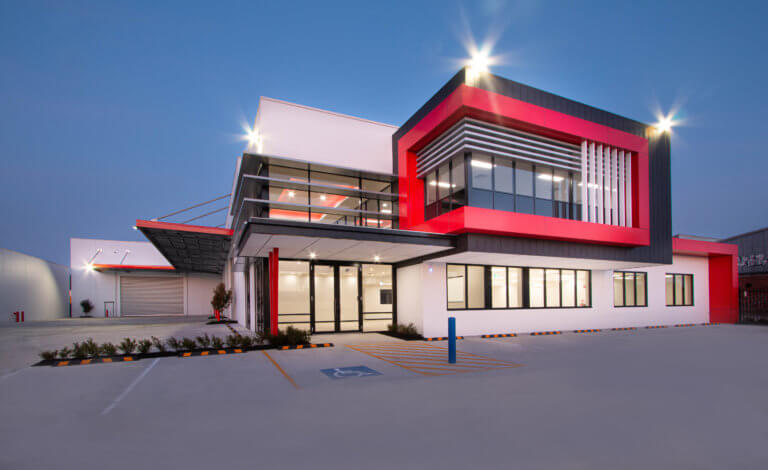 Super Motor Spares is a leading 4WD parts supplier located in Welshpool. The team at Super Motor Spares approached BuildingLines to design a new office and warehouse facility for their rapidly expanding business – and to seek all the relevant approvals to make it happen.

Luckily, that’s what BuildingLines does best!

From the start, we were facing an exciting challenge. The client had already purchased the site they wanted for the new facility, so their main goal was to build as large as permissible on the block. As such, we designed a solution that would deliver a warehouse of 2,000 square meters and two-storey offices over 500 square meters each.

With the space goal fulfilled, we turned our attention to the site itself. After, we determined a few key challenges to overcome before the build could commence.

First, the pre-purchased site was contaminated with uncontrolled fill. As such, before the client could go ahead with the project. The team at BuildingLines worked with authorities to solve the problems with the soil quickly and easily and avoided the very costly remediation expenses usually associated with such a site.

Second, during this process we also determined the local council required access to a stormwater pipe that ran through the property. To remedy that, we piled either side of the pipe and provided control joints in the slab to maintain liftable access to it in future.

Third, owing to the lack of water pressure in the fire water lines, we found there was a requirement to install pumps, tanks and a booster for the site. Our team devised a solution to install the equipment out of the way for the benefit of our client, but still readily available in case of an emergency.

Once the team at BuildingLines had mitigated these key challenges we were able to submit the project for approval. In the end, we had project managed the entire design and approval process from concept through to completion. The only thing we didn’t do was build it!

The client was thrilled with the design of the facility and was highly complementary of the way we handled the project – having managed the tendering process and solved all problems as they arose. That high level of problem-solving ended up saving the client hundreds of thousands of dollars in maintenance and repairs down the track.

Once the facility was built, our client reported they were delighted with the end result. They love the look of the building from the street and feel the façade makes just the statement they were looking for.

Have you got a building project in mind?

Chat to our team of technical project specialists. From approvals to designs to surveying, BuildingLines can help alleviate the significant stress of a new build by taking care of the tricky stuff for you.

We offer a range of building services for commercial and residential projects: